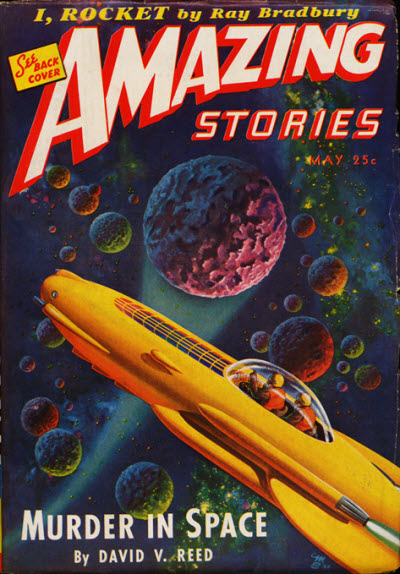 "I, Rocket" by Ray Bradbury is a military science fiction short story, which appeared in the May 1944 issue of Amazing Stories and is therefore eligible for the 1945 Retro Hugos. The story may be found here.

Warning: There will be spoilers in the following!

As the title implies, "I, Rocket" is a story written from the POV of a spaceship. This isn't all that unusual in the modern era, see the Imperial Radch trilogy by Ann Leckie or "Damage" by David D. Levine. But while the science fiction and fantasy of the golden age are full of sentient machines, often possessed or otherwise malevolent, I don't know any other story of this period which has a machine, in this case a spaceship, as a POV character.

Pronouns are always tricky with non-human characters. And since neither the rocket nor Ray Bradbury have expressed a pronoun preference, I have decided to go with "she", since seagoing ships and spaceships are traditionally referred to by feminine pronouns. Besides, the crew also refers to the rocket as "she".

At the beginning of the story, the rocket is lying ruined on a barren pebbled plateau with twisted jets and bashed fore-plates. It will, the rocket calculates, take a few hundred years for rust and corrosion to break her down. And since the rocket has a lot of time on its hands, she decides to share her story.

The rocket was created as a warship to serve in the war between Earth and Mars. Her first captain was a man called Lamb, a man who is described as wrinkled brown leather with diamond eyes and uneven white teeth. Does this man that Captain Lamb is a man of colour or merely that he wears brown leather? It's not entirely clear at this point, though Captain Lamb's face is described as brown and wrinkled throughout, so I assume that he is indeed a man of colour.

The rocket experiences her first launch and notes that this is the first time she's outside the hangar and the base to see the world. She is surprised to find that it is round. There are more surprises in store for our rocket. Momentum, zero gravity, the gravitational forces of other celestial bodies and the indescribable tides of space.

During the rocket's first trip, we learn more about her crew. We learn that Captain Lamb is in love with a Martian dancer whom he hopes to take back to Earth with him after the war. The cook, meanwhile, is eager for revenge, because his parents died in a Martian attack. Two other crewmen, Conrad and Hillary, are in love with the same woman. The young navigator Ayres is experiencing a religious awakening, something which is apparently common among spaceship crews.

And then there are Anton Larion and Leigh Belloc, two crewmen who are planning to sabotage the rocket. The rocket is aware of their plot, but has no way of warning Captain Lamb and the rest of the crew. However, the rocket is resourceful. She deals with the saboteur Belloc and takes him out via a bursting oil pipe. During the confusion that follows, the second saboteur Larion blurts out a confession and tries to escape in a lifeboat. However, our rocket causes the airlock to malfunction, shooting Larion out into space. She likens this to an immune system reaction.

The rocket experiences her first battle and then many others. She also loses two crewmembers to the war. And when the war is finally over, our rocket is converted into a cargo vessel and given a new captain and crew. She transports freight from Venus and Mars to Earth for five years, until she crashes on a asteroid and her crew is killed.

The rocket lies wrecked on the pebbled plateau for four months, until a one-man patrol ship finds her. And the captain of that ship is none other than Captain Lamb, now patrolman, who misses his old ship just as much as she misses him and therefore set out to search for her when she was lost.

Captain Lamb confesses to the rocket that she was the only thing he ever truly loved. Apparently, things didn't work out with the Martian dancer. It also turns out that Captain Lamb is no happier in peacetime than the rocket. However, the Captain tells the rocket, there is another war brewing, this time with Venus, and good rockets are always needed. And therefore, Captain Lamb will be back with a salvage and repair crew to make the rocket flight ready again and return her to Earth. "I'll be captain of you again," he says.

And so the rocket waits in anticipation for her captain to return. 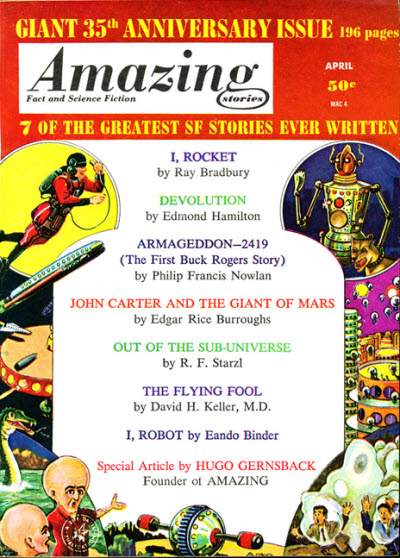 "I, Rocket" is a beautiful story about the love between a captain and his ship and the difficulties of old soldiers – whether human or metal – to function in peacetime. Ray Bradbury really was on fire in 1944 and I could fill the entire short story category on my Retro Hugo ballot solely with Bradbury stories.

Stories about sentient machinery were a thing during the golden age. "Ride the El to Doom" by Allison V. Harding features a sentient elevated train, "Killdozer!" by Theodore Sturgeon features a murderous bulldozer, "The Twonky" by C.L. Moore and Henry Kuttner features an overbearing radio-phonograph console. However, of all these stories "I, Rocket" is not just the only story actually narrated from the POV of a sentient machine, it's also the only one where the sentient machine is unambiguously heroic.

Above, I compared "I, Rocket" to modern science fiction stories with spaceship protagonists. However, "I, Rocket" isn't just a spiritual predecessor to the likes of Ancillary Justice by Ann Leckie or "Damage" by David D. Levine. It is a direct ancestor, because like "I, Rocket" both later stories very much hinge on the love between ships and their captains. And yes, "I, Rocket" is a love story, albeit a rather unconventional one.

Apart from Captain Lamb, the rest of the rocket's crew are roughly sketched and yet these characters come alive in their brief interactions with the captain and each other, all observed by the rocket. When two of them die, we feel their loss as keenly as the rocket.

Of the conversations aboard the rocket, the one between Captain Lamb and the young pink-faced navigator Ayres, one of the two crewmembers who will die during the war, is interesting, because it suggests that most spacemen board their ships as staunch atheists, but find religion along the way, inspired by the grandeur of the cosmos. Religion is not a theme that frequently shows up in golden age science fiction – in fact, the only other story I reviewed where religion plays a role is "The Veil of Astellar" by Leigh Brackett – and if religion appears at all, it is usually portrayed negatively. Hence, the conversation between Lamb and Ayres and the implication that all spaceship crews are religious is so unusual.

In my review of "Highwayman of the Void" by Dirk Wylie a.k.a. Frederik Pohl, I noted that a lot of golden age science fiction seems to take place in the same consensus version of the solar system. "I, Rocket" is another story that is clearly set in the pulp science fiction shared universe. And so Martian dancers wear silver bells and Venusian spider-silk is a popular export good, just as in Leigh Brackett's stories of the same period. But then, Ray Bradbury and Leigh Brackett were lifelong friends and critique partners (and even collaborated on one story), so Bradbury probably deliberately inserted those little Easter eggs referring to Brackett's stories.

Ray Bradbury undoubtedly was one of the best stylists of the golden age and "I, Rocket" once again shows off his writing skills. Bradbury attempts to describe what the world and the universe would look like from the POV of a spaceship and likens the rocket's mechanical components and processes going on inside her to the functions of the human body. I particularly liked a passage where the rocket lands on a planet for the first time and likens the mass and the gravity well to the libido and sex drive. But then, rockets are very phallic. Though it is depressing that the most erotic scene in all of the stories I reviewed for this project is that of a rocket landing on Mars.

Of the five Ray Bradbury stories I reviewed for the Retro Reviews project, one is directly about World War II and three others are stories about war, albeit war in space rather than on Earth. Bradbury never served in the army; he was declared medically unfit due to his bad eyesight. Yet he wrote a lot about wartime experiences, more than most other SFF writers active during World War II. It's also notable that the protagonists of Ray Bradbury's war stories are not soldiers, but a medic retrieving corpses from the battlefield ("Morgue Ship"), a wartime nurse turned murderous mermaid ("Undersea Guardians"), a newsreel photographer ("The Monster Maker") and a war rocket respectively. Bradbury really seems to have wanted to make the point that civilian personnel and other non-combatants (and military vehicles like our rocket) can be as important and heroic as soldiers.

Unlike some of the other 1944 Ray Bradbury stories I reviewed, "I, Rocket" has been reprinted a couple of times. What is more, in 1961 Cele Goldsmith selected it as one of the seven best stories ever published in Amazing for the 35th anniversary issue alongside such classics as "I, Robot" by Eando Binder  or "Armageddon 2419 A.D." by Philip Francis Nolan, the story which introduced Buck Rogers to the world.

Another winner by Ray Bradbury in what was a very strong year for him.
Posted by Cora Buhlert at 00:00