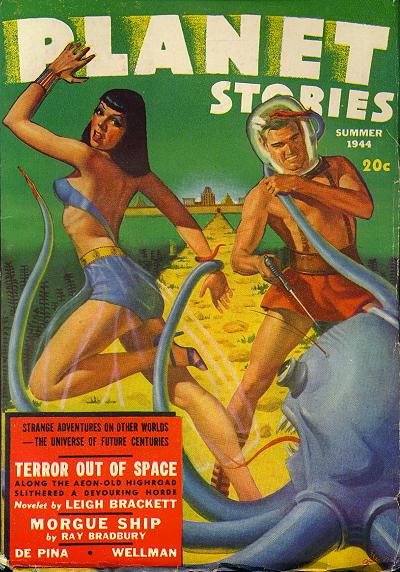 "Morgue Ship" by Ray Bradbury is a science fiction short story, which appeared in the summer 1944 issue of Planet Stories and is therefore eligible for the 1945 Retro Hugos. The story may be found here.

Warning: There will be spoilers in the following!

Sam Burnett is one of two living humans aboard the Constellation, the titular morgue ship, which picks up the dead of an interplanetary war between Earth and Venus and then returns the bodies to Earth. The ship has room for one hundred bodies and Burnett has just picked up body number ninety-eight of his one hundredth run. It will also be his last, for Burnett is burned out both by the sheer amount of death he's seen and also by the fact that instead of wartime heroics, Burnett and the morgue ship only arrive when the war has already moved on.

Body number ninety-eight turns out to be a Venusian officer named Lethla, the righthand man of the Venusian commander Kriere. Burnett's younger and less jaded partner Rice is excited by this find, for if Lethla is aboard the morgue ship and dead, then Kriere must be close by and perhaps injured or dead as well. Retrieving Kriere might well end the war and make Burnett and Rice heroes. However, Burnett dampens his young partner's enthusiasm. The war has long since moved on and Lethla is just another body to be retrieved and prepared.

There is just one problem. Lethla isn't dead. He suddenly sits up on the morgue slab, draws his gun and points it at Burnett and Rice, both of whom are unarmed. Turns out that that he survived because of a thin glass mask and oxygen capsules (the requirements of surviving in the vacuum of space were not yet well known). Lethla then proceeds to destroy the radio of the Constellation and demands that Rice and Burnett help him rescue his superior Kriere. For the ship carrying Lethla and Kriere was attacked and destroyed. Lethla and Kriere managed to survive in a liferocket (the term "escape pod" wouldn't be coined until much later), but they had neither a radio nor sufficient supplies. The morgue ship is their best chance of getting past the Earth blockades back to Venus.

Rice is something of a hothead and attempts to defy Lethla, but Burnett seemingly goes along with Lethla's orders, while plotting to capture both Lethla and Kriere and thus end the war. When they spot Kriere's floating body, Burnett leaves the controls of the Constellation to Rice and operates the morgue ship's retrieval claw to pull in Kriere – body number ninety-nine.

However, Burnett deliberately lets the retrieval claw grip Kriere too tightly, crushing and killing the Venusian. The death of his commander shocks Lethla long enough that Burnett and Rice can attack him. Together, they manage to disarm and kill Lethla, but not before Burnett is shot.

Burnett dies, knowing that he has ended the war and that there will be no more morgue ship trips necessary. He becomes body number one hundred of the last cargo of the Constellation.

When thinking of Planet Stories – home of space opera adventure and planetary romance – Ray Bradbury is not the first author who comes to mind, even though he wrote a fair number of stories for the magazine, three in 1944 alone. Many of the stories that would eventually make up The Martian Chronicles were also first published in Planet Stories.

Few authors of the golden age have the command of language that Ray Bradbury had. Mostly, speculative fiction of the golden age either features the invisible prose found in Astounding or the overly purple prose often associated with Weird Tales under Farnsworth Wright. Not many authors managed to find a golden means between those two extremes, but Bradbury is one of them.

"Morgue Ship" is short, only six pages long (and half a page is taken up by an illustration), but Bradbury perfectly manages to capture the atmosphere aboard the morgue ship with its clinical interior, its shelves full of dead soldiers, the churning blood pumps and whirring machinery, in such a short space. Bradbury also manages to pack the horrors of war in space, the exploding ships and spinning dead bodies among the wreckage, into just a few paragraphs. Finally, Bradbury captures overwhelming weariness of Sam Burnett, weariness with his grisly task, weariness with the war and the feeling that because Burnett is not a combatant, he is not contributing to the war effort.

This last sentiment is something that I have occasionally encountered on the Allied side of World War II, mainly among Americans who were either not fit for active military service or on assignments far from the frontlines and yet yearned for frontline action. On the German side, there also are plenty of accounts of mostly very young boys eager to fight and die for Führer and Fatherland (and by the end of World War II, the Nazis were drafting boys of sixteen and younger, many of whom did not survive), but just as many accounts by mostly somewhat older men, many of whom still remembered World War I and tried to avoid being sent to the frontline by all possible means. In fact, relatively safe posts far from the frontlines were often handed out as rewards for "solid" citizens, while particularly dangerous frontline assignments were viewed as a way of getting rid of malcontents and shutting up problematic people.

"Morgue Ship" was written and published, while World War II was still going on, so the desire of Burnett and Rice to finally get to take part in the action rather than picking up the pieces afterwards is understandable in the context of the time. Furthermore, men of fighting age, who were not in active service, were often treated with contempt or outright hostility on both sides of World War II. "Morgue Ship" is clearly an attempt to show that non-combatants also serve and are vital for the war effort. And since Ray Bradbury was not in the military during World War II (he was rejected for medical reasons), I also wonder whether he did not have first hand experience with the contempt for and hostility towards young male non-combatants at the time.

Though much of the so-called golden age of science fiction coincided with World War II, comparatively few stories of the time reference the war. Of the 1944 Retro Hugo finalists in the fiction categories, the two works that actually reference the war – The Magic Bedknob; or, How to Become a Witch in Ten Easy Lessons  by Mary Norton and to a lesser degree The Little Prince by Antoine de Saint-Exupéry – are both outliers from outside the American science fiction scene. "Morgue Ship" is one of the very few science fiction stories published in the American pulp magazines of the time that address the war at least indirectly.

As I've remarked before, Ray Bradbury's stories are the most timeless of the various Retro Hugo finalists and Retro Hugo eligible stories I have reviewed over the years. Some of the technical details in "Morgue Ship" are dated, but with a few edits the story wouldn't feel out of place in a contemporary issue of Uncanny or Tor.com or Lightspeed or Clarkesworld.

Isaac Asimov and Ray Bradbury were almost the same age (both born in 1920, though Asimov's exact birthdate is not known) and started publishing around the same time, though Asimov managed to break into the pro magazines before Bradbury did. However, the three Asimov stories I reviewed show that Isaac Asimov was still very much developing as a writer at this point in his career, while Ray Bradbury's writing skills are much further along.

In Zen in the Art of Writing, Bradbury wrote that the 1944 Retro Hugo winner for Best Short Story "R is for Rocket" as well as "The Lake", which I reviewed here, were his breakthrough stories, where he stopped trying to imitate other writers and also stopped writing what he believed magazine editors wanted and finally found his own voice. "Morgue Ship" dates from the same period and is another example of Bradbury finding his own voice and style. For "Morgue Ship" is very unlike most stories from this period. In fact, the story of which "Morgue Ship" reminded me most is "Aftermaths" by Lois McMaster Bujold (nowadays included in Shards of Honor as a sort of epilogue), which was first published in 1986, more than forty years after "Morgue Ship".

"Morgue Ship" is not nearly as well known as either "The Lake" or "R is for Rocket" and in fact had never been reprinted until the 2010s in the three volume The Collected Stories of Ray Bradbury: A Critical Edition. This is unfair, because "Morgue Ship" is a great story that shows just how good a writer Ray Bradbury already was at the age of barely twenty-four.

In fact, "Morgue Ship" is probably the most pleasant surprise I've had since I started the Retro Science Fiction Reviews project. For I already knew that "The Lake" and the Leigh Brackett stories were good. "Morgue Ship", on the other hand, was completely unknown to me and turned out to be an unjustly forgotten gem.
Posted by Cora Buhlert at 00:00