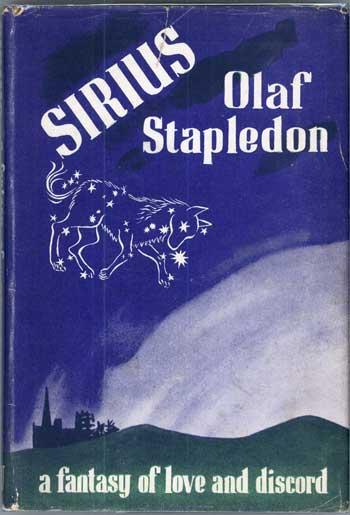 Today, I'm please to feature a guest review of Sirius, a 1944 science fiction novel by Olaf Stapledon. So I'm handing over to Don Briago to give you his thoughts on Sirius.

I'm not sure what Olaf Stapledon's current stature is in the SF community, but back in the day Brian Aldiss and other authorities ranked him with the greatest pioneers of the genre, second only to H. G. Wells himself. Personally, I could never get through Stapledon's forbidding astronomical/evolutionary sagas. I'd occasionally dip into my copy of Star Maker, read one of its breathtaking descriptions of cosmic phenomena, thinking, "Yes! This must be exactly what it feels like to hurtle through space faster than light while observing the birth and then the heat-death of numerous galaxies!" - and then quickly get bored, because that's all the book seemed to have: breathtaking descriptions.

Though Stapledon is on record with the sentiment "A living man is worth more than a lifeless galaxy," his epics remain soulless, nearly devoid of human interest. Like Stanislaw Lem, Stapledon, awe-inspiring as he was, left me cold. Sure, the guy offers you philosophical depth and trail-blazing vision, but would you really want to have a beer with Olaf? American pundits would dismiss him as "unelectable.”

Fortunately, there's at least one surefire way to humanize yourself for the masses: sharing your love of animals. If Stapledon were alive today, he would be delighting us on Instagram by taping strips of bacon to his cat and uploading videos of his Dachshund barking in time to "Jingle Bells." Tragically, in 1944, there was no Instagram, not even any My Space. If you wanted to amuse a wide audience with adorable animal hijinks, your best option was to churn out a novel. Stapledon's is called Sirius.

And you know what? It works. For the first time, Stapledon engaged me at the primal level of storytelling, and got me emotionally involved in the destiny of his protagonist, a hyper-intelligent Alsatian "with a dash of Great Dane or Mastiff." Stapledon tells the story (unexpectedly structured like a leisurely old Bildungsroman) with impressive touches of humor and, yes, humanity.

(The canine terminology is a bit confusing. An Alsatian is what I (and most people?) call a German Shepherd, though throughout the book Stapledon often refers to Sirius as a "sheep dog", which is what I (and most people?) call an Old English Sheepdog. German Shepherds have short hair while sheep dogs sport long, gloriously flowing locks, which is why my parents used to yell at me, "Get a haircut, you look like a goddam sheep dog!” BTW, according to Wikipedia, only two English Sheepdogs have ever won Westminster. This is an outrage.)

Sirius may lack the icy majesty of Star Maker's evocation of the Doppler effect, but it is - to use a word I never dreamt I’d use about Stapledon - cute. Not Baby Yoda cute, perhaps, but Werner Herzog cute. Although I should warn you right away that the ending is anything but cute, and you may find it as upsetting as Old Yeller or Bambi. I found it gut-wrenching without being manipulative, but I realize some people have zero tolerance for any hint of animal suffering. 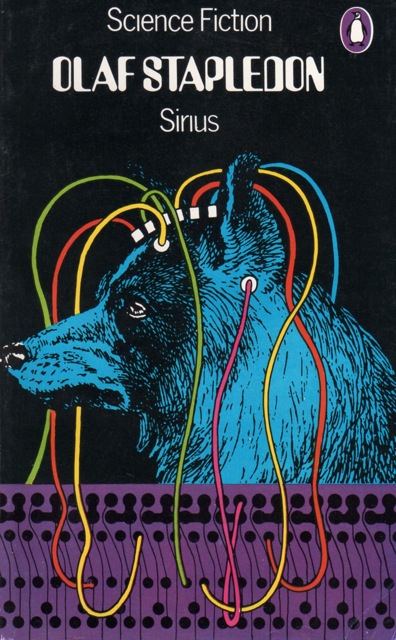 Stapledon doesn't waste time getting the story into gear. After a preliminary chapter introducing the narrator (a very dull dog indeed) to the amazing Alsatian, we learn about the mad scientist Thomas Trelone, who's earning a reputation in Welsh sheep-farm circles for his experiments in animal husbandry. Except I lied, he's not a mad scientist at all, he's another dull dog whom Stapledon hardly bothers to characterize throughout the whole novel, besides now and then referring to him as "unimaginative." Trelone's crowning achievement is Sirius, a dog so smart he's figured out how to communicate in English with growls and consonant-like barks.

Wisely, Stapledon doesn't attempt to transcribe Sirius's pidgin dog-English, instead always reporting his dialogue as it is remembered or interpreted by the humans. (I imagined Sirius's speech sounding like Scooby Doo's.) Noam Chomsky might nitpick about the way Sirius manages to acquire a language in defiance of all modern linguistic theory, but Trelone's hormone-injecting, selective-breeding method of creating an Uber-dog is sorta, kinda scientifically plausible, maybe?

Whatever. I'd have been perfectly happy if Trelone had been a wizard in purple robes who casts a spell on Sirius that gives him the gift of speech. That would technically make the novel fantasy rather than SF, but do we care about that distinction? It doesn't matter how Sirius becomes intelligent. What matters is how an augmented animal intelligence might cast light on human nature, because this is the speculative heart of Sirius.

The dog's unique intelligence doesn't define him. Above all, Sirius is lonely. “Why did you make only one of me?" he asks Trelone. Loneliness is such a painful, difficult subject that even the greatest novelists tend to shy away from it, but Stapledon tackles it head-on. Sirius's dog body alienates him from humans and his human brain alienates him from dogs. He can feel lust for a bitch but "when her heat was over she became devastatingly frigid and unattractive. The fragrance was gone; the moron mentality remained." Desperate to make some connection, Sirius struggles to come to terms with our strange species.

This quest leads him from a Welsh farm where he learns to herd sheep, to Cambridge where he's studied as a lab animal, to churches where he briefly flirts with religion. But nowhere can he get relief. Everywhere he's overcome with human cruelty, dishonesty, and self-deception. Inevitably, Sirius reaches the same conclusion that all the wisest sages throughout history have reached: human beings are shit.

"As he drifted along the streets, he felt stifled by the surrounding herd of the grotesque super-simians who had conquered the earth, moulded the canine species as they trimmed their hedges, and produced his unique self. Feelings of violent hatred surged up in him."

You can probably guess where this leads. Sirius reverts to an ancestral "wolf-mood" and the simians retaliate. Sirius can be forgiven for being a bit skeptical about the innate goodness of human nature. As the war with Hitler begins, the humans start using their marvelous technologies to create deadly rockets, death camps, and nuclear weapons.

Sirius's emotional arc is less satisfying than his intellectual arc. It focuses on Plaxy, Trelone's daughter, who is a baby when Sirius is a pup. Although she's by far the most well-developed human in the novel, Plaxy never quite comes to life as an individual. The early chapters describing their upbringing together are wonderful. The two squabble with each other like siblings but also become possessive when the other gets involved with a different member of their respective species. It's complicated, as the kids say today.

My favorite moment of the novel is when Sirius, aching from loneliness, decides to write and mail a letter to Plaxy at her boarding school. His human brain knows how to do it, but his dog anatomy can't. How on earth is he supposed to sharpen a pencil, open an envelope, apply a stamp, etc.? The scene works as a cute adventure in classic puzzle-solving. I'd argue that it's quintessential science fiction, too. Stapledon breaks down a mundane activity through a fictional technology (animal brain enhancement), and makes the reader appreciate just how miraculous and complex the activity really is.

The novel could have used more little vignettes like this. Stapledon was mainly a "Tell, don't show" type of writer, and much of Sirius consists of reflections on What Is Real and What Is Human, the two great themes of Philip K. Dick's work. Dick's genius was to dramatize ancient philosophical questions using trashy pulp tropes, something Stapledon couldn't conceive of doing. Sirius would have been better if Stapledon had, like Dick, shown more and told less. All the same, I found the book engrossing from beginning to end, and I can't really ask for more than that. Sirius is an accessible, provocative fable that deserves to be a strong contender for a Retro Hugo award.

Many thanks to Don for this great review of Sirius.
Posted by Cora Buhlert at 00:00